crash-avoidance systems (ESC)
are required on all new cars, light trucks, and SUVs

What is ESC? Imagine a computer system in your vehicle that monitors how the driver is trying to control the vehicle and then takes over in an emergency; like if your tires slip during cornering or if the vehicle is about to spin out or maybe when the steering doesn’t respond quickly enough to avoid

an obstacle.  In an instant, Electronic Stability Control can recognize the problem and take corrective actions: Actions like applying an individual brake to correct steering direction or by reducing engine speed. Provided that the tires have good traction during ESC control, you can safely avoid an accident.

ESC is so effective that vehicle accident fatalities were reduced by more than 25% over a five year period. Estimates are that ESC helps avoid 600,000 accidents every year and reduces vehicle roll-overs by 75%. But ESC isn’t new. It was optional equipment in the late 90’s and then grew to being standard equipment on more than 50% of vehicles sold during 2007. ESC and crash avoidance systems actually began with the development of antilock brakes and then traction control. ESC was created by the addition of a Yaw sensor and a computer capable of making more decisions and then sending commands to the brakes and other critical control systems.

Vehicle safety systems continue to improve with additional sensory inputs like proximity sensors and cameras that alert both the driver and the computer. Understanding how your vehicle is equipped and maintaining the vehicle’s traction capabilities (Steering, suspension, shocks, struts, brakes and tires) is critical to the performance of crash avoidance systems.

You can read a full explanation below, or watch this video demonstration from the Discovery Channel. 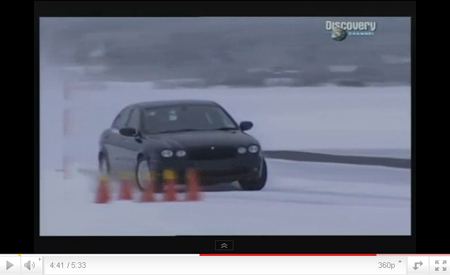 How does it work
Electronic Stability Control is designed to slow and control the vehicle from under-steer and over-steer. It uses both ABS and Traction control advantages, along with engine management and a yaw rate sensor to know when the vehicle is going a different direction than the driver intended. This hybrid system helps avoid spin-outs and roll-overs, which in turn, saves lives. ESC uses the same sensors as ABS and Traction Control, then adds a yaw rate sensor and in some cases a steering angle sensor. This basically results in a computer system that knows the speed of every tire, the intended engine speed, the lean & roll of the vehicle on its axis, the intended steering direction, and when any tire is losing traction. The ESC Computer System is capable of more operational input and can make more rapid driving corrections than any human will ever be capable of. 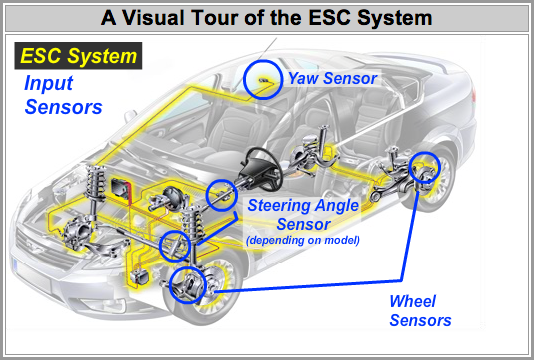 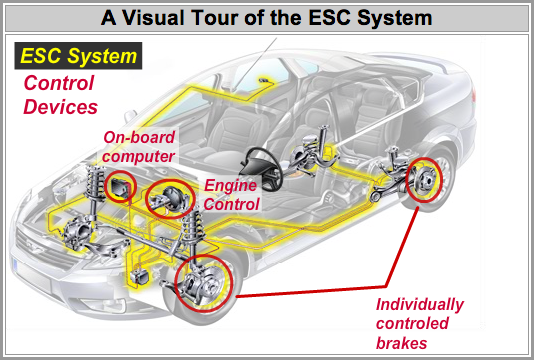 Control devices: ABS, Traction Control, and ESC all control the vehicle by modulating brakes on individual wheels in precise amounts. Unlike the others, ESC also has the ability to modulate the throttle (engine speed) and transmission. ABS works great at preventing skidding and sliding in a straight line, and Traction Control prevents wheel slippage, but only ESC prevents vehicles from skidding during curves.
Does your vehicle have ESC
If it is a model year 2000 or newer, it may have ESC. And, you may have ESC and not know it, since ESC is sometimes called by different names depending on the manufacturer. The Insurance Institute for Highway Safety provides a list of vehicles with ESC. To find out if your specific vehicle is equipped with ESC visit their website. http://www.iihs.org/iihs/ratings/safety-features
The seat belt of the 21st century
Numerous studies have shown ESC is highly effective at preventing loss-of-control and fatal crashes. The Insurance Institute for Highway Safety estimates 10,000 fatal crashes and up to 238,000 injuries could be avoided each year*. Vehicles with ESC reduce the risk a fatal loss-of-control by half. ESC has been described as the most important advancement in safety by automotive experts. (*in the United States).   Now entering service bays Estimates show that 60% of all vehicles in service bays are 4 to 12 years old. There are scores of 10-11 year old ESC-equipped vehicles on the road today. Almost a third of 2005 model year vehicles have ESC and more than half of all 2007 light duty vehicles are equipped with ESC. It’s important for both motorist and service provider to know whether the vehicle has ESC or not. Why? Two big reasons:
Maintenance suggestions for ESC-equipped vehicles

While the electronic components of your ESC system won’t wear like tires, shocks, struts, or brakes; they should be inspected on a regular basis. Check your Owner’s Manual for a schedule provided by the manufacturer.

Brake and tire wear rates vary, so ask your local Certified Ride Control Specialist to inspect them and other components that affect ESC. With proper maintenance, you can be sure that ESC will continue to keep your vehicle operating as it was designed.